Another session with a below average catch.
The  comparison below shows the current situation. 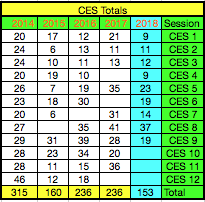 The CES season has again started very slowly at Kenfig.
The numbers so far have been

This seems to be reflected in other parts of the country and does raise concerns about the bird populations generally.

We did however manage to take some pictures of a number of birds. 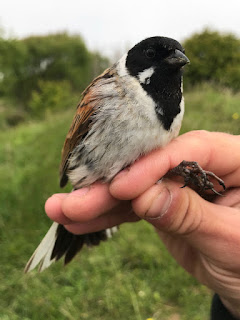 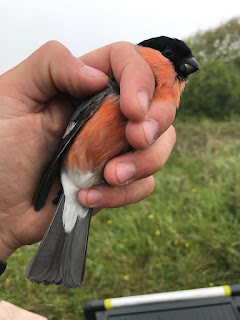 These were caught on the first two sessions when Steve and Kirsty were able to assist.
Thanks to them both and we wish them well in future as they are destined for ringing much further afield from now on.

In session 2 Kirsty spotted a willow warbler hanging about a bush adjacent to our ringing table and then located the nest pictured below. 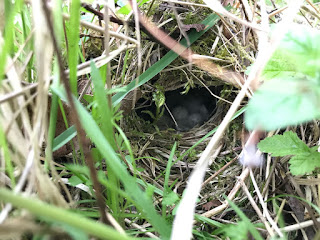 Interestingly at Session 3 Wayne checked the birds were still there and were lucky enough later in the morning to spot one of the birds fledging. We then checked the nest at the end of the session and they had all departed.

Session 4 was highlighted by these 2 Jay which turned up in the nets twice. They were obviously preoccupied with things other than avian navigation during the morning 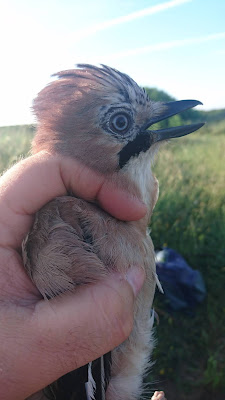 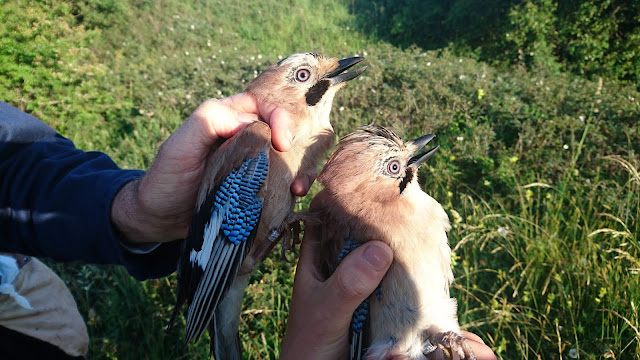 After a wait of almost a year we are back ringing at the farm. Hard to believe the last visit was 17th Feb 2017.
We had cleared the site and set up the feeders a couple of weeks ago hoping the weather would be picking up.
Kirsty, Steve, and Chris met at 07:30 and it was with a degree of anticipation that we set up the nets (3x60', 2x40'), as Steve had been at the site the previous day reporting that there were plenty of birds about.
It looked pretty good from the start and the session as a whole was very productive.
The total compares favourably with the total birds caught at the farm last year (58). We have to hope that we can get back there soon.

The morning started with a glorious sunrise as evidenced by the pic below. 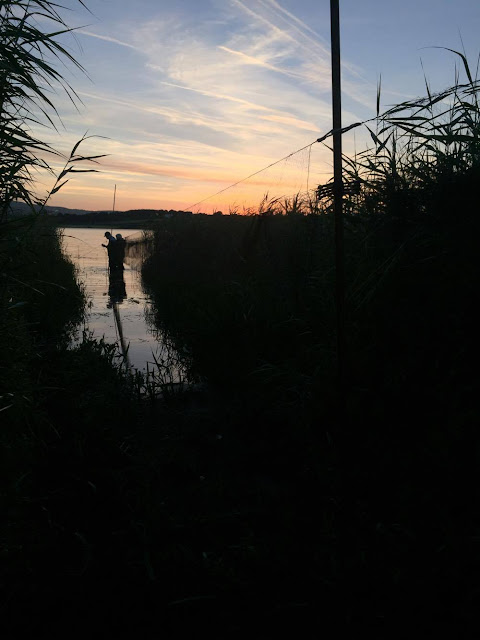 What the picture doesn't show is a modicum of panic when we reach the final net to find that the usually ready installed guy rope had been shredded by some necessary but enthusiastic clearance of the reeds. Undoubtedly a moral here is "carry a spare guy at all times". i.e. be prepared. Where's a boys scout or girl guide when you need one?
We still managed to have the CES nets up by 06.10 before moving on to the scrub areas to put up the extra nets as per session 10.
It was a slow morning and surprisingly the additional nets were far less productive than previously though from a CES point of view it was a positive days work. As can be seen by the results table on the linked page this year CES has matched last years with the last visit to come and two missing sessions.
The usual suspects turned up with this week these two - 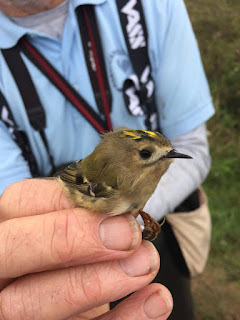 Thanks for the assistance again of Heather,Stephen and Kirsty(who supplied the photos).

Totals for the day - 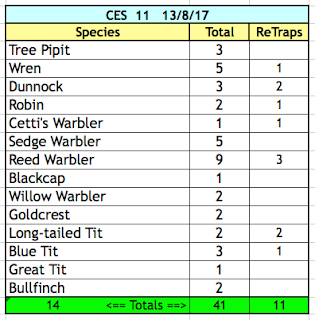 After a very frustrating day checking the weather which seemed to be changing hourly the decision was made to go for a session today.
The weather looked close to perfect when we all met at 05:30. Today's team consisted of Cedwyn Sarah, Kirsty, Stephen and Chris.
As there were a number of us we decided to put some extra net  in place on a ride a little further into the scrub and crossing a gap in a line of trees. 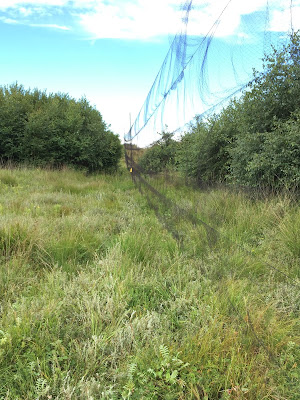 This meant we had a total of 10x60' nets in place, so boredom shouldn't be on the cards this morning.
Especially as we were again dealing with bird poo in the interest of science.
There were a good selection of birds in a fairly steady stream for the first hour or so, mostly the regular species of warblers (reed, sedge and willow) but then we caught one of my favourite birds ( I like them all really) a Lesser Whitethroat. 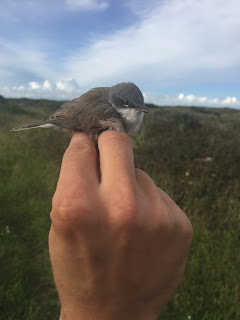 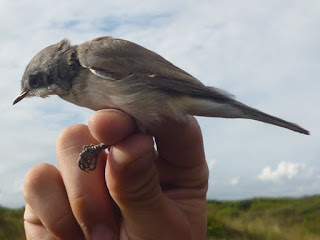 At this point Dave had arrived and heard tree pipit overhead, We were already using a tape lure playing on  the non CES ride, so Cedwyn decided to change the tape and we were rewarded almost immediately with a few pipit in the net. 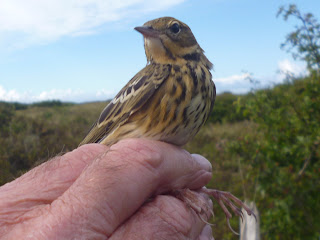 The steady run of birds continued and included another less than regular species, this garden warbler. 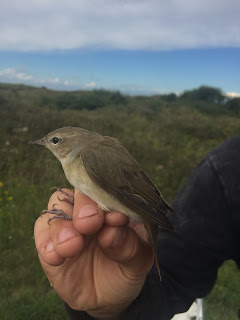 Though a good session overall the downside was that the CES total of 20 birds for the morning was disappointing. That said the annual total this year is an improvement on the average of the last few seasons.
Totals for the day: 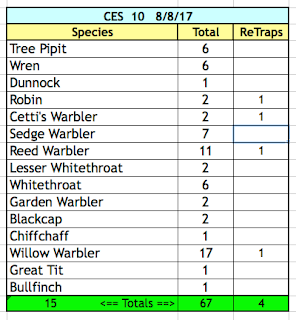 With no entry since CES 3 this is a rather later than desired catchup on the CES ringing at Kenfig. Weather and availability of ringers has meant that we have missed 2 recent CES sessions.
The results here are for session 5,7,8,9 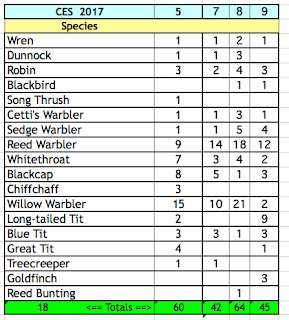 The numbers are significantly better than recent years. As mentioned previously we are assisting Sarah Davies in her study of the feeding habits of warblers, so it was pleasing that we had good numbers of the target species.
We had the usual run of nets in both the reed bed and adjacent scrub.

Thanks to Kirsty and Stephen for their assistance through the morning.

The weather was just perfect for us to get the nets up by 6:05am, with no wind and a completely over cast start to the day.
Heather, Sarah and Chris were then joined by Kenfig volunteer Val who was keen to assist with the scribing.
The first round was a catch in the CES nets of a pair of bullfinch.
Later a family of  great tits had obviously encountered the WPS nets, though the adult birds were smart enough to avoid being caught leaving us with this handful of juveniles. 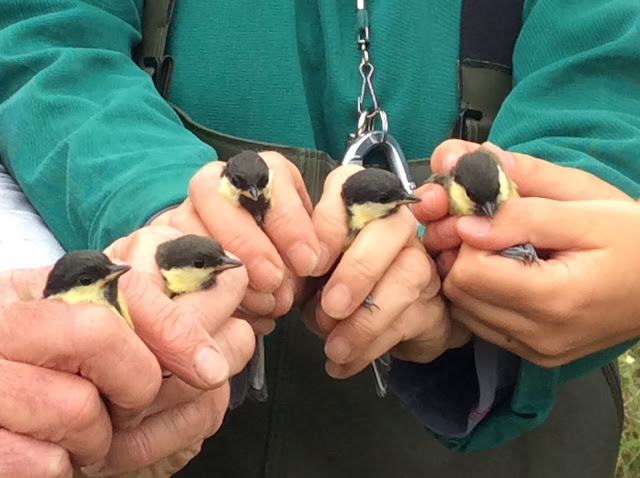 They were all of a similar weight indicating the adults must have had their work cut out to keep them all well fed. We made sure we released them all together to rejoin the parents in  the nearby scrub.
This robin was a very newly hatched bird as the colouring in the picture hopefully demonstrates. 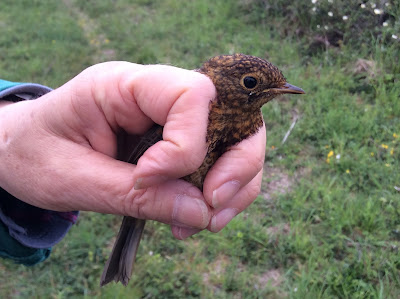 The weather became a little brighter and warmer through the morning and the catch was then pretty slow in keeping with recent years CES records. The total catch being only very slightly more than the same session last year
Thanks to our interested visitors, Kevin and Tracy, for the pictures. 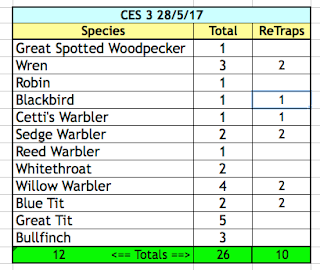